Wine is a rich source of polyphenolic antioxidants. Polyphenols are also widely present in fruits and vegetables.

Figure 6. Average levels of malvidin-3-glucoside in four red wines made in 1989, 1990, and 1991. Source: Reprinted with permission from Waterhouse and Teissedre, Ref. 10. Copyright 1997, American Chemical Society.

Figure 6. Average levels of malvidin-3-glucoside in four red wines made in 1989, 1990, and 1991. Source: Reprinted with permission from Waterhouse and Teissedre, Ref. 10. Copyright 1997, American Chemical Society.

Thus, healthy diets, as the Mediterranean diet, consists of large amounts of fruits and vegetables, with only limited levels of meat, and moderate amounts of red wine. Etha-nol, the largest component of wine (<14%), and the polyphenols seem to be the healthful natural chemicals of wine as described in "The French Paradox."

Phytochemicals, such as the polyphenolics of food and wine that have disease-fighting and wellness-promoting qualities, have been recently termed nutraceuticals. The use of food as medicine was first presented in recorded history by the famous oath of Hippocrates, who stated he would use food first to treat disease and alleviate suffering in his patients. The use of wine in control of diseases of the heart and blood vessels has been advocated since the thirteenth century, but scientific studies published in 1904 first showed that consuming alcoholic beverages reduces the incidence of coronary artery diseases (13). Most physicians are hesitant to advise patients to drink moderate amounts of alcohol or wine, probably due to alcohol's potential abuse and known health problems in heavy drinkers. However, several population studies have shown that cardiovascular-related mortalities follow a U-shaped curve; light drinkers have lower cardiovascular-related mortalities than abstainers or heavy drinkers (14). Doll (15) has shown that drinking moderate amounts of alcohol daily, between one and four drinks for persons over the age of 45, reduces the risk of heart disease and premature death. There does not seem to be any positive effect from daily alcohol consumption for people under the age of 45.

Get All The Support And Guidance You Need To Permanently STOP The Battle With Alcohol Once And For All. This Book Is One Of The Most Valuable Resources In The World When It Comes To Transformational Tools For Battling Booze Binges And Staying Alcohol-Free.

How To Prevent Cardiovascular Disease Naturally 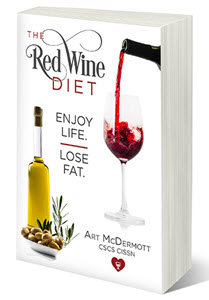