Discover The Secret Of Immotality 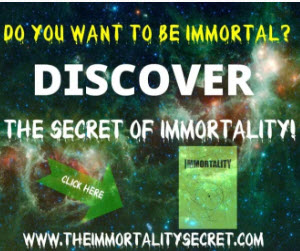 Death is the word we use to signify the end of life as we know it. As stated above, individuals and groups hold different understandings of the existence and the death of the self. These understandings are the background for the nuts and bolts medical decision that a person has died, when death should be declared, and what ought/ought not be done to and with the physical remains of the person who has died.

As individuals and as cultural groups, humans differ in their most basic assumptions and beliefs about human death. For some the death of the body marks the absolute end of the self; for others it is a transition to another form of existence for the continuously existing self. This transition may be to continued life in either a material or an immaterial form. Despite these differences, every human community needs a way of determining when one of its members has died, a necessary and sufficient condition for considering the body as the remainder of the individual that can now be treated in ways that would have been inappropriate or immoral before, and for preparing the body for removal from the communal setting. Different philosophical and theological perspectives on the nature of death, the individual self, and the death of the self will yield different choices of criteria for the determination of death, just as these differing perspectives yield very different death practices or death behaviors. To see why this is the case, various philosophical and theological views of death and the self must be reviewed.

In the Hebrew tradition of the Old Testament, death is considered a punishment for the sin of disobedience. It is an absolute punishment. This tradition does not hold a concept of an afterlife following the punishment of death. But it would be misleading to say that this tradition has no conception of immortality, since the communal setting of the individual's experience and life remains the arena of that person's identity and impact, even after the death of the body. Although the conscious life of the person ceases, the person lives on in the collective life, unless he or she lived badly. Thus, immortality is the community's conscious and unconscious memory of the person.

Another view, originating in Platonic philosophy and found in Christian and Orthodox Judaic thought, and in Islam and Hinduism, holds that death is not the cessation of conscious life. The conscious self, often referred to as the soul, survives in a new form, possibly in a new realm. The experience of the self after the death of the body depends on the moral quality of the person's life. The body is the soul's temporary housing, and the soul's journey is toward the good, or God, or existence as pure rational spirit without bodily distractions. Thus, death is the disconnection of the spiritual element of the self (mind, soul, spirit) from the physical or bodily aspect of the self.

Traditions believing in eternal life differ in their view of the soul and its relationship to the body. This has implications for the criteria that might be used to determine death, as well as for the appropriate treatment of the body after death. The soul is viewed by some as separate and capable of migrating or moving into different bodies as it journeys toward eternal life. The Christian tradition, by contrast, posits the self as an eternally existing entity created by God. The death of the body is just that—the person continues, with body transformed, either punished in hell for living badly or rewarded in heaven for having faith and living righteously. These diverse views have a common belief: Everyone survives death in some way. This may influence the understanding of what constitutes the death of the body as well as of what ought/ought not to be done to the body of the person who has died. For some traditions, certain bodily functions are indicative of life, whether or not those functions are mechanically supported, and damage to the body is damage to the self.

In contrast to these theological conceptions of death and the self, three philosophical perspectives, secular in that they hold materialist views of the self, figure in Western thought: the Epicurean, the Stoic, and the existential. A materialist view of the self considers the human to be an entirely physical or material entity, with no soul or immaterial aspect. The Epicurean view of the self holds that humans are fully material beings without souls. The goal of life is to live it well as it is and not to fear death since death is the end of experience, not something one experiences. Therefore, there is no eternal life for souls; the body dies and disintegrates back into the material nature from which it sprang. The death of the body marks the end of consciousness, and thus the death of the self. A materialist holding a view such as this could conclude that the cessation of consciousness itself should be considered death, whether or not the body continues to function in an integrated manner.

The Stoic view acknowledges death as the absolute end of the conscious self but directs persons to have courage about its inevitability and to resign to it creatively. This creative resignation is achieved by focusing on the inevitability of death in such a way that one treats every moment of life as a creative opportunity. The necessity of death becomes the active inspiration for the way one lives. Like the Epicurean view, the Stoic conception ties the self to the body; the end of the self to the death of the body. But it is the consciousness supported by the body that is the creative self.

In contrast existential thought believes that the absoluteness of death renders human life absurd and meaningless. The other materialist views of the self saw death as the occasion for meaning in life, not the denial that life has meaning. Rather than infusing meaning into life and inspiring a commitment to striving, existentialism holds that death demonstrates the absurdity of human striving. While individuals may pursue subjective goals and try to realize subjective values during their lives, there are no objective values in relation to which to orient one's striving, and so all striving is ultimately absurd. Since death is the end of the self, there is nothing to prepare for beyond the terms of physical existence and the consciousness it supports.

Without critiquing these theological and philosophical perspectives on death and the self, an inquiry into their diversity is relevant to a discussion of the debate in bioethics about the criteria for determining that a human being has died. The earlier demonstration that the criteria rest on a decision of functional significance, and that a decision of functional significance is philosophically/theologically informed, coupled with this demonstration of philosophical/ theological diversity on the fundamental concepts of self and the death of the self, together show that criteria are acceptable only if they are seen to be consistent with an accepted philosophical/theological frame, and that what is acceptable in one frame may be unacceptable in another.

Further, while it might be the case that virtually every tradition has agreed on the appropriateness of the traditional heart and lung criteria for declaring death, they may do so for vastly different reasons deriving from their specific understanding of death and the self. There may be ways of reconciling virtually every ontological view to the use of the traditional criteria but not to the use of consciousness-centered criteria like the higher brain-death criterion, or even the brain-death criterion (which appears, to a tradition like Orthodox Judaism, to deny that the still-functioning body is indicative of life, even when the entire brain is dead).

Philosophical and theological commitments relate centrally to society's death practices, including conclusions concerning the acceptability of traditional, and whole-brain, and higher-brain formulations of death. How philosophically and theologically sophisticated has the bioethics debate on the definition of death been, over the years?

Everything you ever wanted to know about. We have been discussing depression and anxiety and how different information that is out on the market only seems to target one particular cure for these two common conditions that seem to walk hand in hand.

Discover The Secret Of Immortality