Reactive oxygen species (ROS) are now associated with manifestation of several oxidation-linked diseases such as cancer, cardiovascular diseases (CVD) and diabetes; epidemiologi-cal studies indicate that diets rich in fruits and vegetables are associated with lower incidences of such oxidation linked diseases. These disease protective effects of fruits and vegetables are now linked to the presence of antioxidant vitamins and phenolic phyto-chemicals having antioxidant activity, which support the body's antioxidant defense system (12-15). This has led to an interest in the use of diet as a potential tool for the control of these oxidative diseases (5,16-18). This is further supported by recent in vitro and clinical studies which have shown that lack of physical activity, exposure to environmental toxins, and consumption of diets rich in carbohydrate and fats induced oxidative stress, which was decreased by consuming fruits, vegetables, and their products (19-26).

Phenolic phytochemicals with antioxidant properties are now widely thought to be the principle components in fruits, vegetables, and herbs that have these beneficial effects. Most phenolic phytochemicals that have positive effect on health are believed to be functioning by countering the effects of reactive oxygen species (ROS) species generated during cellular metabolism. Consumption of natural dietary antioxidants from fruits, vegetables, and herbs has been shown to directly enhance scavenging of ROS, prevent the formation of ROS, and enhance the function of the antioxidant defense response mediated by Glutathione, Ascorbate, superoxide dismutase (SOD), catalase (CAT), and glutathi-one-s-transferase (GST) interface (15-20).

Specifically, oxidation of biological macromolecules as a result of free radical damage has now been strongly associated with development of many physiological conditions that can manifest into disease (27-31). The first and widely accepted mode of action of these phenolic phytochemicals in managing oxidation stress related diseases is due to the direct involvement of the phenolic phytochemicals in quenching the free radicals from biological systems. Phenolic phytochemicals, due to their phenolic ring and hydroxyl substituents, can function as effective antioxidants due to their ability to quench free electrons and chelate metal ions that are responsible for generating free radicals (32). Phenolic antioxidants can therefore scavenge the harmful free radicals and thus inhibit their oxida-tive reactions with vital biological molecules (32).

Ability of phenolic phytochemicals is preventing of cardiovascular diseases (CVD) has been well described by epidemiological studies. The "French paradox" describes a famous study linking the lower incidences of CVD in the population consuming wine as part of their regular diet (46). Recent research has revealed that these beneficial effects of wine are due to the presence of a biologically active phenolic phytochemical "resveratrol." Inhibiting of LDL oxidation (47) and preventing platelet aggregation (48) are now believed to be the mechanisms by which resveratrol and other phenolic antioxidants prevent development of CVD. Phenolic phytochemicals have also been able to reduce blood pressure and have antithrombotic and antiinflammatory effects (48,49). Phenolic phytochemicals have also been shown to inhibit the activity of alpha-amylase and alpha-glucosidase which are responsible for postprandial increase in blood glucose level, which has been implicated in the manifestation of type-II diabetes and associated cardiovascular diseases (50,51).

How I Healed my Diabetes 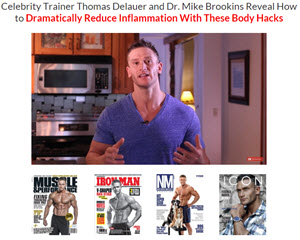